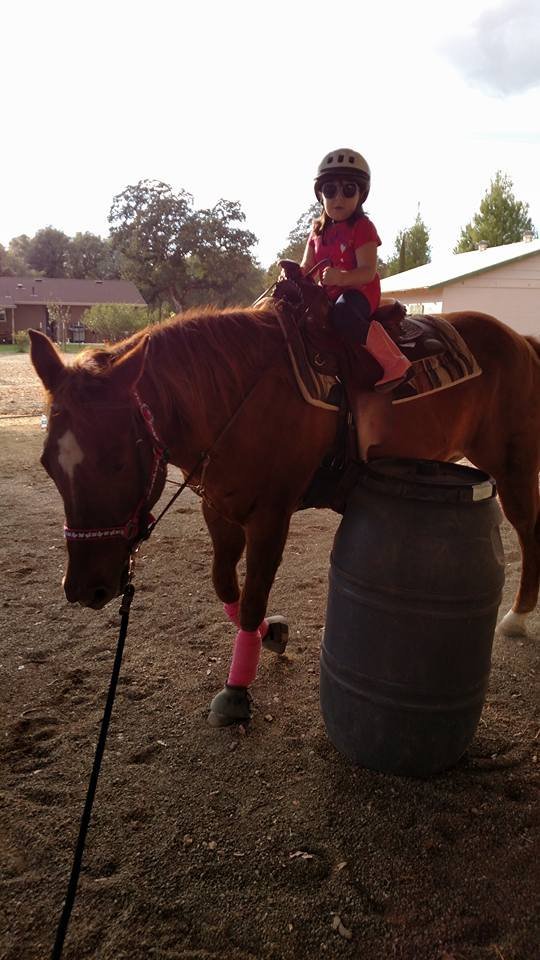 McKenna was born June 23rd, 2006 at 6:14am weighing 8lbs 5.7oz via emergency c-section at Evens Community Hospital, Fort Carson Colorado. My husband and I were both in the Army stationed at Fort Carson. I had got out taking of my husband who had been injured in Iraq with a TBI and other injuries. My pregnancy was a little rough, McKenna wanting to be born early on a few occasions. When the time came she did not want to come out, 36 hours later she was delivered. She and I were in the hospital for four days. While in hospital I had needed blood transfusions and she had to be on oxygen, during that time her doctors found out she had two holes in her heart. Nothing serious enough that she had to have anything immediate done. We went home being told to follow up with a cardiologist and to keep her on the oxygen and a machine that would monitor her o2 saturations and heart rate. Things seemed to be going good until 2am one morning when I reached over to check on her and she was burning up. I checked her temperature and she was 104.7, we immediately rushed her to the ER. We found out through test she had a kidney infection and had to stay in hospital for three days. During that time we discovered she had urinary reflux and an extra urinary tract tube. This was causing her urine to back up into her kidneys causing the infection. We were then referred to an urologist who then put her on meds to prevent urinary tract infections and help with the reflux. Around that time we weaned her from her oxygen. Then at about ten months we took her in to see her pediatrician who had labs done. Everything changed at that moment, her platelets, RBC, WBC and other levels had dropped and she wasn’t growing. Multiple tests were run, we were referred to another hospital to do additional tests, nothing was found fitting the tests done. The doctors thought it maybe the meds for her reflux and had us stop them. We were then referred to a hematologist at the Denver Children’s Hospital in Aurora Colorado.

The doctor there ran more tests and a bone marrow biopsy and again nothing was fitting what she was being tested for. Around the same time McKenna had been followed up by cardiology and the holes in her heart had closed, thank goodness. However she would need surgery for her urinary reflux, bilateral bladder re-implantation surgery at two years old. They surgery went well and the next day we went home with follow-ups to come. We were also planning a move to California to be closer to friends and family.

The summer of 2008 we moved to California and found an amazing pediatrician. She referred us to UC Davis in Sacramento California to be seen by and followed up by a hematologist there as we still did not have diagnoses for what was going on with McKenna. We were told she had Aplastic anemia and may need a bone marrow transplant and come back in six months. Well this was not the protocol we had been given by Denver Children’s Hospital and things did not sit well with us. So we went back to McKenna’s pediatrician and asked for a second opinion. We were then referred to hematology Lucile Packard Children’s Hospital at Stanford in Palo Alto California about five hours from where we live. The hematology team at LPCH was above and beyond amazing and told us if in the process of finding a diagnosis if they were 100% sure, we would keep trying to find the answer. The testing started in November of 2009 we had no clue how long the road would be and McKenna wasn’t getting better. She had stopped eating, growing and had bone marrow failure and failure to thrive. She was always in pain with bad headaches. Then in January of 2010 the many hospitalizations and life flights would begin. We went from hospitalizations a week here and there to what seemed like every other week we were in hospital locally then transported to LPCH, Stanford. Then the hospitalizations seemed to be longer with multiple UTI’s, pancreatitis, hypoglycemia, elevated liver counts, kidney infections, c-diff, high INR’s, the list goes on. She ended up having a NG tube, then a peg tube then a feeding tube. She had also started needing blood and platelet transfusions and had to get a pic line for the weekly labs she had to have.

It was not until March of 2010 she was diagnosed by Dr. Greg Enns, biochemical genetics doctor at LPCH, Stanford. She was diagnosed with Mitochondrial DNA Deletion Syndrome with large deletions for Kearns-Sayre Syndrome, CPEO, Pearson marrow/pancreas syndrome, and maternally inherited diabetes/hearing loss. Her underlying diagnoses are lengthy and she has a specialist for all of them. I want to mention them because I think it’s important for others to understand how complex this disease is. We went into this blindly not knowing anything about this disease; her type of deletion was rare and fairly new to a lot of the medical team. She was diagnosed with the following underlying diagnoses: adrenal insufficiency, hypothyroidism, growth hormone deficiency, hyponatremia, hypoglycemia, Fanconi Syndrome, leucopenia, anemia, thrombocytopenia, intestinal dysmotility, transaminitis, exocrine pancreatic insufficiency, severe obstructive and central sleep apnea syndrome with hypoxemia, diabetes insipitus (that one is still unclear). McKenna’s genetics doctor put together a team for our daughter that she would need to see, she was put on medications to keep her stable.

It seemed we had made it through some of the toughest times and finally in January 2012 we had gone three months with no major hospitalizations. McKenna asked the question she had been asking all along expecting the same answer, could she take ballet. We were told if we could make it to March without any major hospitalizations her doctor said she could take dance classes, ballet, jazz and tap. It was then our daughter was finally allowed to be a child to live, dream and laugh and engage with other children. She could take dance classes but we still had to be very careful and keep her away from anyone who was sick or been around anyone who had been ill.

From the start she has loved to ride her horse, and we actually use our horse as a form of mental and physical therapy for McKenna, helping her with balance, strength and confidence. She also loves to garden, ride her quad and get muddy then go and get a pedicure and manicure. Holidays are one of her favorite things to celebrate; we missed so many of them over the years. We love McKenna so much; she is an amazingly wonderful child with a big heart and wise soul, wise beyond her years. She has taught us a lot about life and how we should live it, “Live each day to its fullest, and don’t miss a beat!”